Drug-induced inhibition of the human ether-à-go-go-related gene (hERG) ion channel has been related to the susceptibility of patients to potentially fatal ventricular tachyarrhythmia, torsade de pointes. In recent years, a number of FDA-approved drugs were withdrawn from the market due to their off-target effect on hERG. As a result, there has been an increasing need for identifying compounds that block the hERG channel at earlier stages in the drug discovery process. Here we present the utility of a new potassium assay kit on the FLIPR® Tetra High Throughput Cellular Screening System to investigate hERG compound activity. The assay exploits the permeability of thallium (Tl+ ) for potassium (K+ ) channels, which is detected by a novel fluorescence indicator dye. Seven reference hERG blockers are examined in a cell-based assay, and the results are compared to values obtained using the IonWorks Barracuda® Plus Automated Patch Clamp System.

The FLIPR® Potassium Assay Kit (Figure 1) contains a thallium-sensitive indicator dye. During the initial dye-loading step, the Tl+ indicator dye as an acetoxymethyl (AM) ester enters the cells through passive diffusion across the cell membrane. Cytoplasm esterases cleave the AM ester and relieve its active fluorogenic form. In addition, a proprietary masking dye is applied extracellularly to reduce background fluorescence. To activate the potassium channel, the cells are stimulated with either a mixture of K+ and Tl+ or a ligand in the presence of Tl+ . The increase in fluorescent signal represents the influx of Tl+ into the cell specifically through the potassium channel, and therefore represents a functional measurement of the potassium channel activity. The FLIPR Potassium Assay Explorer Kit (Molecular Devices cat. #R8222) contains Tl+ -sensitive dye, masking dye for homogenous operation, 200 mM K2SO4, 50 mM Tl2SO4, 5X chloride-free buffer, and HBSS + 20 mM HEPES buffer. The kit supports ten 96-, 384-, or 1536-well plates. The assay workflow is shown in Figure 2. 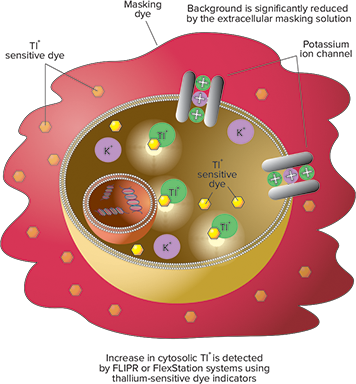 The hydrophobic property of compounds impacts the apparent potency values, likely through non-specific binding to labware. In this study, compounds were first diluted in 100% DMSO, followed by transfer with mixing to HBSS + 20 mM HEPES buffer in glass-lined polypropylene plates immediately prior to assay.

Chinese hamster ovary (CHO) cells stably transfected with human Kv11.1 (hERG) ion channel were provided by ChanTest Corporation (Cleveland, OH). Cells are plated at 6,500/well in a 384-well, blackwalled, clear bottom plate two days before the assay in growth medium including selection antibiotics and incubated at 37°C and 5% CO2. Twenty four hours prior to the assay, the growth media is exchanged for induction media containing tetracycline. Four hours prior to the assay, the cells are switched from 37°C to 28°C for enhanced membrane expression of hERG channel. Plates are incubated with dye for one hour at room temperature in the dark.

For pharmacology analysis, hERG channel blocking compounds are added first and incubated for 30 minutes at room temperature. Previously optimized stimulus buffer is added to the well during detection on the FLIPR Tetra System. The 470-495 nm excitation LEDs and 515-575 nm emission filter are used). For comparison, parallel experiments were performed using the FluxOR Assay Kit (Life Technologies). The manufacturer assay protocol was followed when using this kit. Data is acquired at one second intervals for approximately 140 seconds. Data files are exported to GraphPad Prism for analysis.

Figure 3: Optimization of hERG channel stimulant. Cells were incubated with dye and the stimulant buffers were added during detection on the FLIPR Tetra System. The concentration-dependent response of signal was characterized under different conditions. Optimal signal was obtained from the combination of 1 mM Tl+ and 10 mM K+ (final concentration) stimulant buffer diluted in chloride-free buffer.

For comparison purposes, IC50 values for the same set of hERG channel blockers were collected using the IonWorks Barracuda System1 (Figure 4). To capture frequency-dependent compound effects, the voltage protocol is applied five times at 0.1 Hz before and after compound addition. Peak amplitude of hERG tail current at the fifth sweep is used to measure compound effects.

Figure 4. Electrophysiology assay on the IonWorks Barracuda System. Compounds were added at 3X final assay concentration in 1% DMSO and mixed with buffer in the well to achieve a 1X final compound concentration in 0.33% DMSO. Compounds were incubated for five minutes, after which a voltage protocol was applied with a one-second stimulation at +40 mV, followed by a one-second step to -50 mV for measurement of peak tail current.

Seven known hERG blockers were evaluated using the FLIPR Potassium Assay Kit. The concentration response curves are shown in Figure 5. IC50 values compared to data obtained on the IonWorks Barracuda System are shown in Table 1. The rank order of compound potency was preserved between the two assays and IC50 values were within one-half log with good correlation. 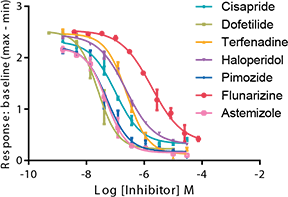 Table 1. Comparison of IC50 values of the FLIPR Potassium Assay Kit on the FLIPR Tetra System and electrophysiology data on the IonWorks Barracuda System.

In addition, three compounds were used to evaluate performance against another thallium-based assay kit, the FluxOR Potassium Ion Channel Assay (Figure 6). The IC50 values are similar between assays as shown in Table 2. However, the signal window provided by the FLIPR Potassium Assay Kit is 2.25 (determined as ratio of response vs. baseline), which is significantly higher than the value for FluxOR (0.5). The negative control is 4 µM terfenadine which blocks the hERG channel response, and the positive control is buffer which elicits maximum response by the hERG channel to the stimulus buffer. Lower well-to-well variability and a larger signal window combine to provide larger Z’ factors as shown in Figure 7. This is likely due to the FLIPR Potassium Assay Kit being a truly homogeneous assay that does not require wash steps or media replacements and therefore shows less well-to-well variability. 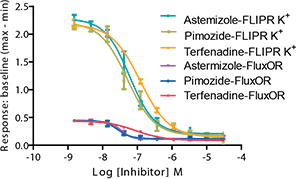 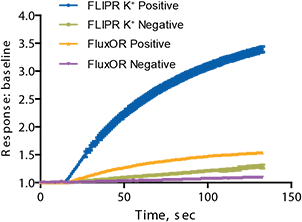 The FLIPR Potassium Assay Kit measures the functional activity of potassium channels using a homogeneous, no-wash protocol. In this study, we used a set of reference hERG blockers to demonstrate the tight correlation of results from the FLIPR Tetra System with data collected using electrophysiology methods.

In a separate set of experiments, the FLIPR Potassium Assay Kit displayed a significantly larger assay window and a higher Z’ factor when compared to a competitor product. The improved assay quality, in combination with the high-throughput capability of the FLIPR Tetra System, provides a powerful platform for analyzing hERG liability during earlier phases of the drug discovery process.

Compatible with these Molecular Devices systems