Molecular Devices SpectraMax® i3x MultiMode Microplate Reader, in combination with luminescent assays for cell viability and cytotoxicity, provides a sensitive and rapid way to measure the number of viable cells in culture and quantify the cytotoxic effects of experimental treatment. The CellTiter-Glo assay from Promega uses luciferase enzyme, which requires ATP in order to generate light. The luminescent signal produced in the assay depends on the amount of ATP in the culture, which in turn depends on the number of viable cells present. The Bioluminescence Cytotoxicity Assay Kit from BioVision is based on the measurement of adenylate kinase (AK), a ubiquitous protein present in all cells and released into culture medium upon loss of plasma membrane integrity. AK converts ADP to ATP, which is then detected via a luminescent reaction.

To ensure accurate cell numbers for the cell standard curves, cells were assayed immediately. 100 µL (96-well assay) or 25 µL (384-well assay) of CellTiter-Glo reagent was added to each well. The plate was mixed gently for 2 minutes on a plate shaker and then allowed to incubate at room temperature for 10 minutes to stabilize luminescence.

A 1:10 dilution series of ATP was set up in solid white 96- and 384-well plates at concentrations from 10 uM down to 1 nM, along with blank wells containing no cells. The CellTiter-Glo assay was used to measure ATP. Microplate optimization and read height optimization were performed for best results.

HeLa cells were seeded at 15,000 cells per well in 96-well solid white or clear-bottom tissue culture-treated microplates and allowed to attach and grow overnight. The next day staurosporine and anisomycin were added to the cells to induce apoptosis. Compounds were added as a 1:2 dilution series starting at a top concentration of 50 µM and going down to 24 nM. After 24 hours of treatment with compounds, cells were assayed with the CellTiter-Glo and BioVision Cytotoxicity kits.

For the cell viability assay, 100 µL of CellTiter-Glo reagent was added to each well of the solid white plate containing treated cells. The plate was read about 10 minutes after reagent addition to allow for cell lysis.

For the BioVision cytotoxicity kit, 100 µL of culture medium was removed from each treated well and transferred to a solid white plate. 100 µL of AK Reagent Working Solution was added to each well, and the plate was read within 30 minutes.

SpectraMax i3x reader settings were configured as indicated in Table 1.

The SpectraMax i3x reader was able to detect as few as 10 cells per well in both 96-well and 384-well assay formats. Cells can thus be measured at numbers below the detection limits of standard colorimetric and most fluorometric methods. The CellTiter-Glo assay was linear over the entire range of cell concentrations used, spanning greater than three orders of magnitude with r2 > 0.99 (Figure 1). 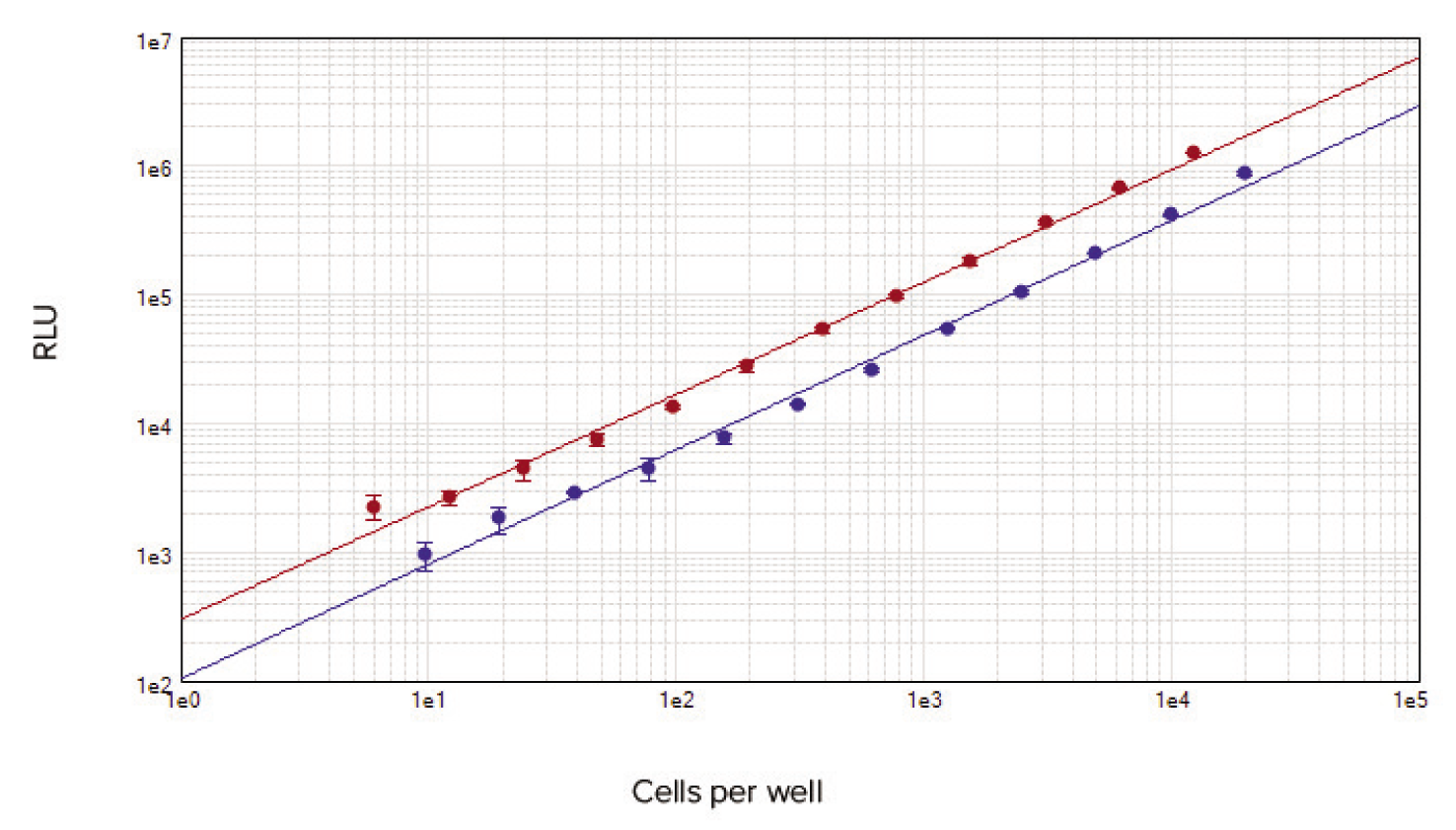 Figure 1. Cell standard curves for 96-well (blue circles) and 384-well (red circles) assay formats are shown. In each format, cell numbers at least as low as 10 cells per well can be detected. For both standard curves, r2 > 0.99.

ATP standard curves can be used to verify assay performance and calculate cellular ATP content. Here, luminescent signal from ATP standards ranging from 1 nM to 10 uM covered the entire range of luminescence output observed in the numbers of cells assayed here (Figure 2). Measurements were linear over at least four decades. 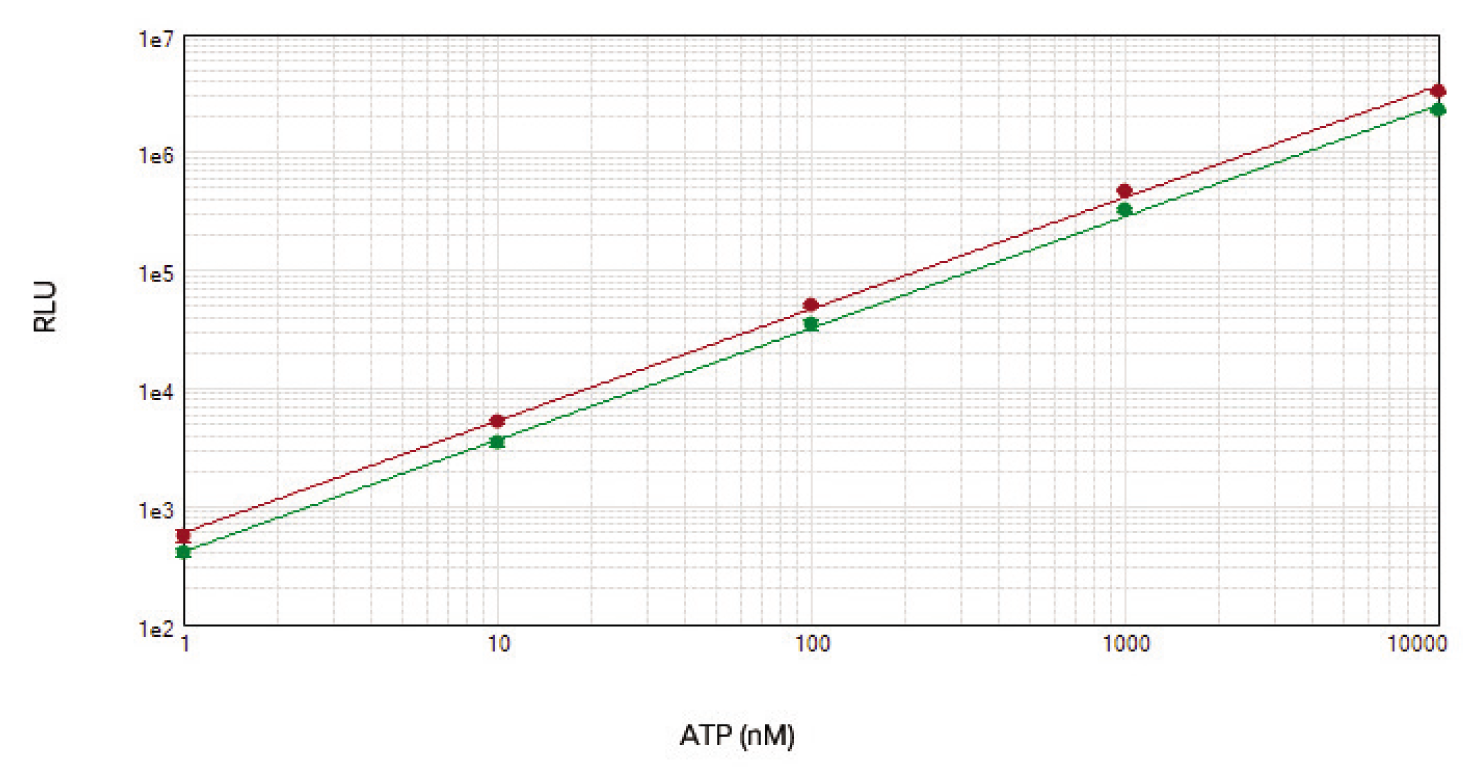 Cells treated with the compounds staurosporine and anisomycin were assayed for cell viability by measuring ATP levels (Figure 3), and for cytotoxicity by assaying for the enzyme adenylate kinase (Figure 4). Both assays yielded similar IC50 values for staurosporine (0.34 µM and 0.15 µM, respectively) and for anisomycin (3.30 µM and 2.28 µM). 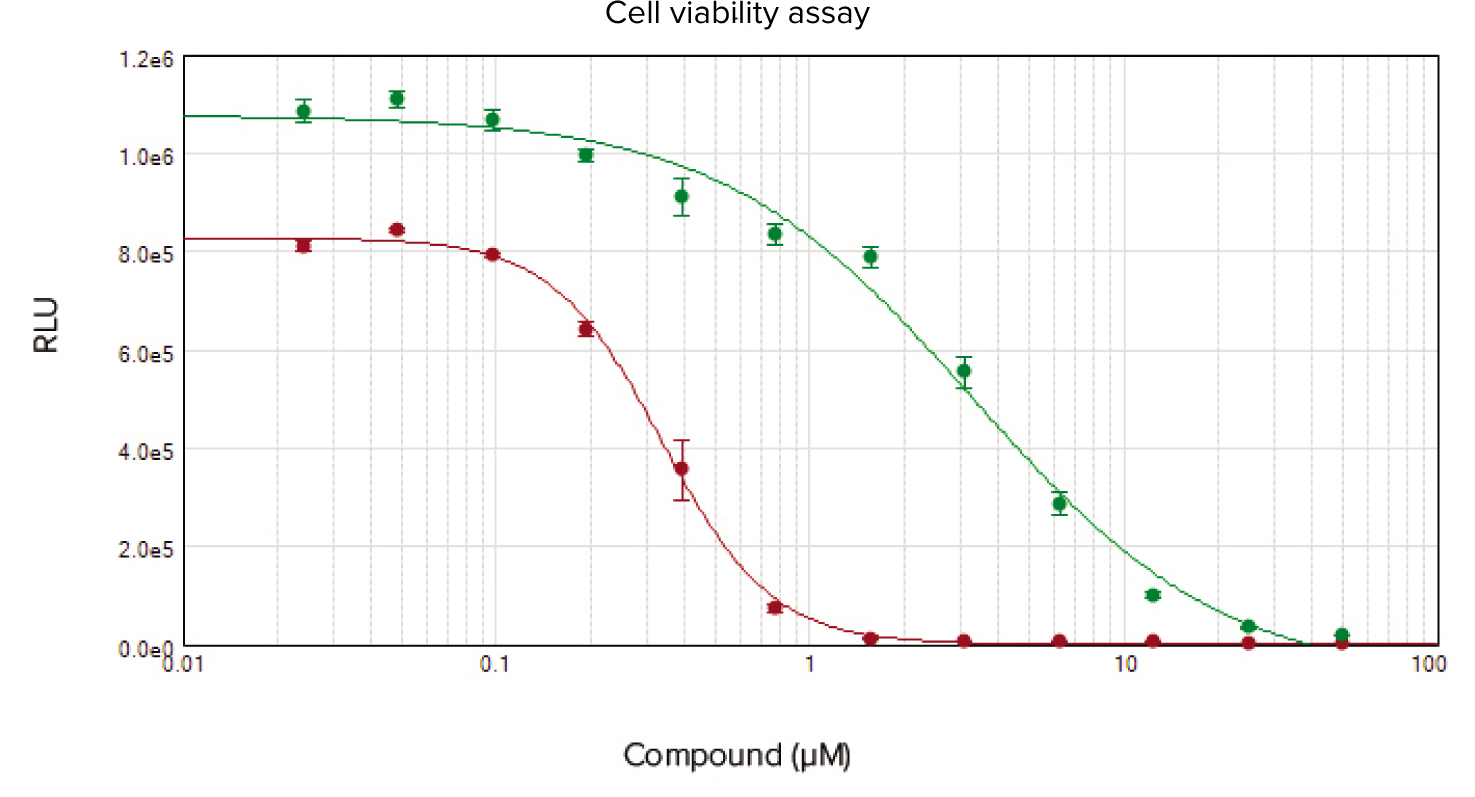 Figure 3. Concentration-response curves for HeLa cells treated with staurosporine (red circles) and anisomycin (green circles) for 24 hours. The IC50 value for staurosporine was 0.34 µM, compared to 3.30 µM for anisomycin. 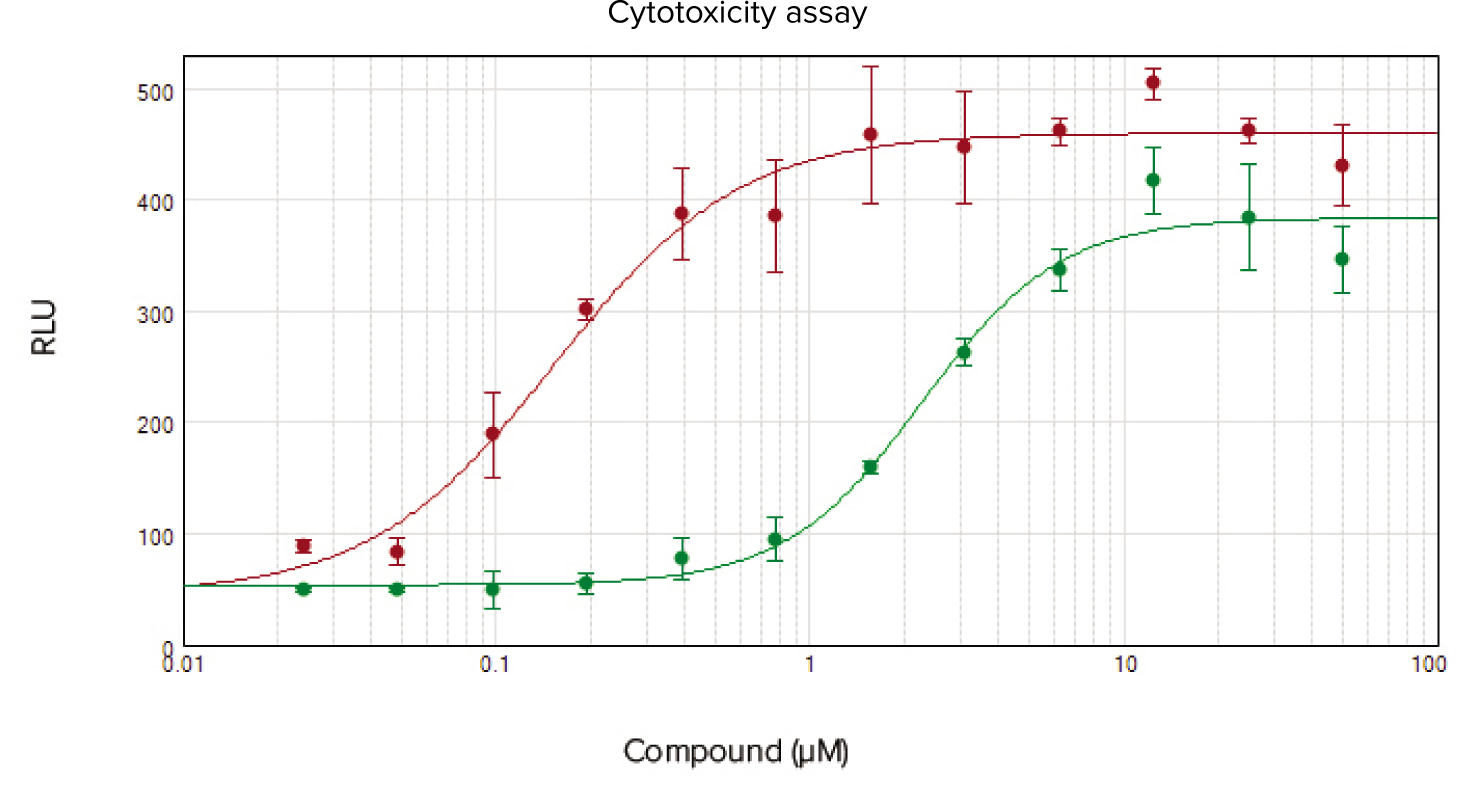 The SpectraMax i3x reader offers excellent sensitivity in luminescence detection for ATP-based cell viability and adenylate kinase-based cytotoxicity assays, enabling detection of as few as 10 cells per well. Four-parameter curve fitting and calculation of IC50 values were all done within the SoftMax Pro Software. Microplate and read height optimization wizards ensure optimal signal detection and are automated by the software.

The ability to add user-exchangeable cartridges, including time-resolved fluorescence and western blot detection, and the optional SpectraMax® MiniMax™ 300 Imaging Cytometer module, expands the reader’s detection capability and enables application options far exceeding those of other readers. All instrument configurations are operated using SoftMax Pro Software, which contains preconfigured protocols for CellTiter-Glo and over 120 other assays to facilitate data collection and analysis.